The strange thing is, I read Leaving The Atocha Station, a novel by Ben Lerner about a twenty-something poet on a yearlong fellowship in Madrid, exactly two years since I was in Madrid myself. Every August, my husband and I crave experiences that remind us of the feeling of being in Spain. It’s a subconscious thing that creeps up, till we’re searching out a certain al fresco spot; the familiar architecture of a building; or the effervescence of a Spanish wine.

I remember how, on our trip, Michael blew our budget with his obsession for Hendricks & Tonic: served in giant goblets with plenty of cucumber slices. Each cocktail cost 16 – 20 Euros, while a bottle of wine was never more than 4. We reveled in masses of art at the Prado, Reina Sofia, and Thyssen museums. Every day, the same waiter at the same restaurant in our small neighborhood got my order for Iced Espresso wrong. I couldn’t seem to master proper Spanish pronunciation. 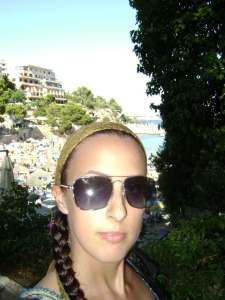 In Mallorca, we weren’t sure how to get to the beach, so we followed bikinis onto a bus and got off where they did, ending up in a luxurious spot, eating Tuna Tartare and drinking more Gin before joining all the topless bathers. I wanted to go topless as well, like I did at a nude beach in New York, but being a newlywed, I was still struggling to figure out my new identity.

Mainly a poet, Leaving The Atocha Station is Ben Lerner’s first novel. It’s hard to tell where he ends and where his protagonist begins.

The magic of Lerner’s character, Adam, is that he is a complete anti-hero. Adam thinks all the thoughts that I often feel, but would never actually admit to. He’s been offered a prestigious fellowship, but cowers from his superiors, has no intention of writing on the topic of the Spanish Civil War (like he claimed in his application), and spends most of his time smoking hash and hoping that one of the two women he spends time with will suddenly feel passionately for him, which of course, they never do.

“I had a policy of keeping Isabel away from Arturo and Teresa, not because I didn’t think they’d like each other, but because I wanted them to believe I had an expansive social life (Lerner, 53).”

Adam shrinks from responsibilities, putting all of his energies towards being wanted. His melt under pressure as a young twenty-something reminds me of an episode of Girls, where Lena Dunham’s character gets a deal for an e-book that she’s told must be written in one month. The stress drives her crazy, reigniting her past struggle with Obsessive Compulsive Disorder, resulting in a punctured eardrum due to her over-zealousness with a Q-tip.

Who can write a book in a month? I’m sure that even Kerouac’s claims were doctored up a bit. In my early twenties, everything that involved pressure under fire in the grown-up world brought on the worst kind of anxiety. I set myself up to fail. I learned quickly that the only jobs that worked for me were the ones that allowed time to write with a thoroughly interesting nighttime life. I lived for stories, not for security. I also lived for being wanted and affirmed.

At full-time day jobs, I fell apart. Sick all the time, anxious, creeping further and further within a figurative turtleneck. I freaked out 24/7 that I would say the wrong thing, and I often did.

Since I’ve been married, I often run the risk of losing my mojo, because having mojo is no longer life or death. I have Michael to cushion life’s blows. In sixteen years, when he retires, the weight may be all on my shoulders again. What will I be at that point? Will my books ever take off? Will I ever be able to make a living as a writer? I need all that mojo to make something of my dream. But instead, I am planning exit strategies, just in case. Real Estate is always in the back of my mind. Could I do that and everything else on top of it too? Could I write, sell houses, and grow a human? Or can I live on this writer cliff for the rest of my life – where total uncertainty always gives way to food and shelter working out in the end.

The poet in Ben Lerner’s novel thinks about becoming a lawyer when he returns home. Do all poets, writers, artists, musicians have these thoughts? Probably.

“But in certain moments, I was convinced I should go home, no matter the mansion, that this life wasn’t real, wasn’t my own, that nearly a year of being a tourist, which is what I indubitably was, was enough, and that I needed to return to the U.S., be present for my family, and begin an earnest search for a mate, career, etc (Lerner, 163).”

Never giving up on your creativity is a daily battle. The anti-hero of the book barely attempts it, and yet things magically fall into his lap, thanks to connections. It’s so good to feel like a winner. That feeling you have when you know what you can give has value, and people show their appreciation, and you show your appreciation right back, and the world feels like the weave of a basket, never ending, interconnected, supportive; even when you fuck up and never write that poem about the Spanish Civil War.

What is a life of poetry, but an endless journey through dense portals of thought that barely connect and keep us in the place of philosophical quandaries?

“Poetry actively repelled my attention, it was opaque and thingly and refused to absorb me; its articles and conjunctions and prepositions failed to dissolve into a feeling and a speed; you could fall into the spaces between words as you tried to link them up; and yet by refusing to absorb me the poem held out the possibility of a higher form of absorption of which I was unworthy, a profound experience unavailable from within the damaged life, and so the poem became a figure for its outside (Lerner, 20).”

The same is true for Adam’s experience of the Spanish language, the culture, his general distance from the alternate reality of living there, a place that can never really be his.

In Spain, everything feels different, while nothing feels different at all. It’s an odd feeling. Spain has modernity, while still retaining old world graces and sophistication. I felt like a gypsy next to the polished style of the locals. I knew I would never fully understand the language, no matter how long I lived there. Not the language exactly, but all of the meanings behind the language. All of the movements of their fans, which they handled with so much panache, it was like they’d been flipping them since infancy. I could easily live there for the rest of my life, but not in a million years could I ever master the culture. How can you, unless you grow up in it?

§ One Response to Alternate Realities Of Ex-Patriots

You are currently reading Alternate Realities Of Ex-Patriots at Lauren J. Barnhart.