On the front cover of Shann Ray’s book of short stories, American Masculine, two bison lock horns.The week I read it, friends on Facebook posted photos of bison as they drove past them on road trips. I have never been in bison country, and did not know that the herds are still so prolific. Tucked away in cities, I rarely come into contact with the wildness of nature, minus attacks from small insects.

Shann Ray’s stories deal with men grappling over their western roots while facing life in the modern world. There are memories of rodeo’s, bottled up emotions that lead to rage, and the sense that when you leave the country behind, life is a barren wasteland.

I was drawn to read Shann Ray’s stories because my husband, Michael, is writing a novel based on his childhood in Texas. His father was wound tight, a Vietnam vet, uncontrollable, massive, simmering, abusive, senseless, always waiting on the border of explosion. I have never met my father in-law, and never will.

My own father was not a man of the West (more like Midwest). He grew up in Chicago, the city where cows were shipped in to be processed at the Union Stock Yards.

My dad was tiny – more suited to gymnastics than football. His father’s blue-collar dream was for my dad to become a horse jockey at the races. The Barnhart’s revolved around the track. Great grandmother spent hours figuring out which horses to bet on. On the weekends, my grandfather watched the horses fly. Their ability to run to nowhere, a constant reminder that there was no way out from his treadmill of a job. Life was hard work. But the horses brought glamour, excitement, and beauty to an otherwise difficult existence.

Even in Chicago, horses were a part of the daily fabric. It was about being a man (a big man), not getting cheated, not getting beat up, not revealing your vulnerability; silent at home, boisterous at the bar.

When I was a kid, my dad was intimidating, stressed out, and probably a little depressed from having to work so much. Whenever I was alone with him, I was never sure what we would find to talk about. His own father (who died when I was eight) never said one word to me.

Silence was my first impression of men. The little boys on the block played with me until I was five, and then they went quiet. It was no longer cool to play with a girl. Now they had to feign a crush or show aversion. Chasing me on their bikes, the only sound I heard was shifting gears and wind.

Boys only spoke if they wanted to add to my list of insecurities. It seemed that everything about me, as a girl, was wrong to them. I began to fear my need for their approval and attention.

After my sister and I left the house, my dad learned how to be a really loving father. He’d done his job raising us, and he let go of the fear of failure. He listened to his co-worker and friend, Bruce, talk on the telephone with his daughters. Bruce listened, said, “I love you,” and encouraged. He wasn’t afraid to cry. As my father grows older, he becomes softer, more vulnerable, more loving.

My husband, Michael, is quite a bit like Bruce. But there is another side to Michael that is just like his Texan father. He blows a fuse every now and then. He can be irrational, highly emotional, extremely sensitive. These are things his father tried to hide, which resulted in explosive behavior.

Michael is obsessed with the hero’s journey. He’s been a lifetime devotee of comic books. He lives in the plot. No matter what he goes through, he’s never a victim, always the hero.

He escaped his father at fifteen years old. From then on, he was homeless, until the Marines recruited him when he started boxing at a gym. For three years he was a guard at the London Embassy. After his discharge, he received a Master’s in English (though he only went to one day of high school). He also traveled around the world for a year on his bicycle. I’ll never get to see quite as much of the world as he has.

Shann Ray paints a sinister, sad, hopeless picture of the American male. Almost all of his men are the sort you’d want to escape. If it isn’t the man, it’s the woman involved. The men struggle to grasp with life in the office after the farm, the rodeo, or the reservation.

“He wants and doesn’t want to say how right she was, how poor a man he is, has always been, … like most men, same poverty of mind, same darkness. Hidden, unknowable. I tried, he says aloud as she sleeps. But he knows he didn’t (Ray, 59).”

But what about the tenacity of the American male? The will to fight against the odds? The drive? The ability to turn poor circumstances into positive opportunities?

Quite possibly, the average person does not achieve this, and I am just living with an exception. For every brother that breaks the pattern of the father, there is always another brother left behind who becomes the father. All of the men in my family are the ones that got away.

Shann Ray’s characters pine for the lost sense of being a hero – lassoing cattle, riding horses, working with their hands. Their large bodies feel like a waste at tasks that have no physical value. Academia is vacant, the desk a torture of monotony. Sex or violence is the only savior from boredom and oncoming death.

It is hard for me to relate to Ray’s view of the western man in the modern world. His characters are all victims, fragile, emotionally weak, lacking in awareness. I am much more interested in people who take control of their lives, striving to find their own personal place of fulfillment. Life is hard, and you have to fight to not let it weigh you down. Do what you love to do, and happiness follows, even if that means going back to the farm. I know plenty of people who are doing just that.

The issue is not even about the farm verses the office. There is a lack of vision in the characters – humans blindly going through life, unable to change, afraid, stuck. Frustrating intensity, with no answer to the riddle, and the brother’s that are left behind.

I am so happy to announce that my memoir No End Of The Bed is now available on Amazon! 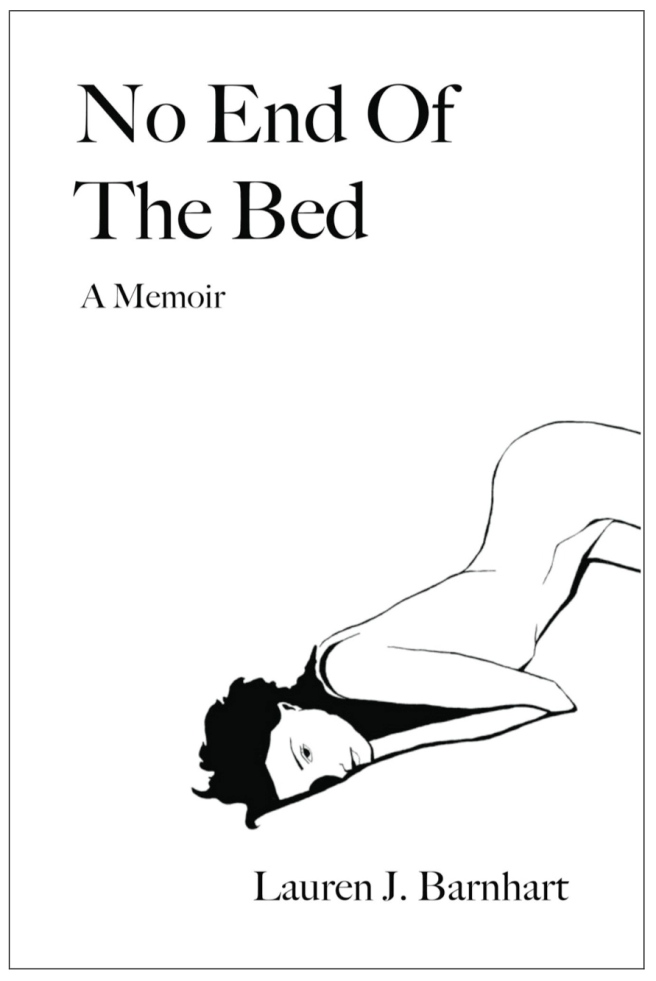 Lauren J. Barnhart’s memoir No End Of The Bed spans her search for truth through differing perceptions of sex, with some surprising parallels made between the fundamentalist church and the sex-positive movement.

Raised within the confines of Fundamentalism, Lauren J. Barnhart is instructed that her body is inherently evil and unclean; that innocence is of the highest value; and that a woman is meant to be a servant to everyone but herself. She struggles to believe all that she is told or else disappoint family, friends, and an all-knowing God.

At age twenty-one, outside of her small conservative college, Lauren expresses her sexuality and is surprised to discover a lack of guilt for her transgressions. Within nature rather than against it, awakened to all five senses, she begins to record the feelings of intense love and empathy that she failed to find within the church.

In the search for something more, she is drawn towards a group of polyamorists, who celebrate the body and the freedom to express themselves with many. Through their zest for life, she abundantly taps into her artistic nature. But at the same time, she experiences the same misuse of power that was left behind in the pews. Realizing that the need to find a leader is a fallacy, Lauren learns to value her own true voice, and finds the strength to forge a different path.

I began this book when I initially broke with the church twelve years ago. The experiences I had along the way were strange and extraordinary, and it took the entirety of that time since, for the story to fully unfold. In fact, the last chapter took place exactly one year ago.

In my early twenties, I became obsessed with the need to capture everything I was experiencing. I kept detailed journals, wrote poems, songs, and began writing short stories that grew to connect as chapters.

It took ten years, and one year of prodding from my husband, before I could face the fact that I was writing a memoir. I’m still shocked that I’m not hiding behind the false label of fiction. There are truths in the book that I wouldn’t even tell my close friends. But a book is different than a conversation. And without total and complete honesty, the story loses its effect.

Others who feature in my story might not remember the details the same way that I do. Each and every one of us has a different set of memories. But we all shared the same arc from repression to crazy expression.

I am very immersed in the present right now (more than I have ever been). I could not let go of the past until I finished this book. It helped me to process my life. I came to understand everyone else’s motives. I forgave them and went through a long phase of constantly thinking through the male mind. At least that is to say, the male minds that are in the book!

In the end, I found that there were more similarities between the Fundamentalist church and the Sex-Positive movement, than dissimilarities. Erica Jong once wrote, “All pornographers are puritans.” Residing in one extreme, the complete opposite extreme lies within it, just under the surface of repression.

Growing up, I was told that the body I live in is rife with taboo. I wanted to understand why. I put myself in highly uncomfortable situations just to test my own limits. I discovered that taboo only exists in your mind. Fear is based on the unfamiliar. Rules and religion began with the human desire for control and patriarchy, and control keeps the masses in the dark.

Through the long, arduous publication process, passages, words, phrases, and pages jumped out at me: flashes of years past. No End Of The Bed shows me how far I’ve come. I feel invulnerable to judgment. The young, confused girl in the book is not the woman that I am today.

But I also miss certain aspects of that very youthful place. I was so open to people that it bordered on unhealthy, though I learned so much from them. I was also scared shitless of all the new people that spoke a different language than the religious language I grew up with. Lately I am reminded, that if you’re not scared shitless, you’re not really living. Being on the stage seems to provide that over and over for me. I like to be constantly challenged so that I can keep growing.

Right now, I have two other books in the works, and I will be publishing other authors as well through Knotted Tree Press including literary fiction, memoir, essays, and poetry. You can find out more at Knotted Tree Press.

In the memoir, I found responsibility for my self. I let go of the need for a leader, and discovered my own truth. In taking charge of the publishing of that memoir, I found responsibility for my work. I’ve loved every detail of editing, formatting, designing the cover artwork, and marketing. The funny thing is, it took exactly nine months to complete the publishing process. Now, it’s just so good to be back to writing again.